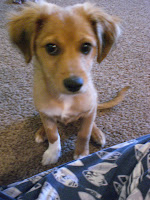 We have a new addition to the Fisher family already. I have been obsessed with the thought of having a puppy for a very long time, and I somehow convinced Jesse into getting one. We did a lot of looking around and finally found the perfect lil guy on a website called CAWS (community animal welfare society). We met him and instantly fell in love, he really is the cutest puppy I've ever se 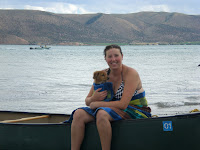 en. Fritz is part chihuahua and part ? You would not really guess chihuahua when you see him, but I think it means he'll stay small and I'm happy about that. Fritz is ridiculously scared of everything at first, but we force him to do a lot. We have him meet lots of people and dogs, and we took him swimming at Bear Lake (he's a natural) this last weekend. We held him right above the water and before he even touches it he starts swimming, it was so funny Fritz had all of us laughing for a while. He is like a baby because he likes to be craddled and he is an Attention Hor! Jesse is head over heels for Fritz, he loves him and is sad because Fritz loves me more and follows me everywhere. As with most puppies he has some incidents, but so far he's been a great puppy and we think will turn out to be a great dog. 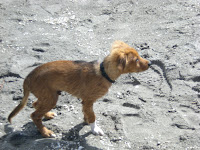 Dana Fisher
I am a twenty three year old girl who talks to much and just wants to have fun. I am married to the love of my life Jesse Fisher and I'm still trying to figure out just who I want to be when I grow up

Queen of the Crazies 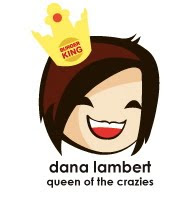 My friends proclaimed me this and Angella animated me